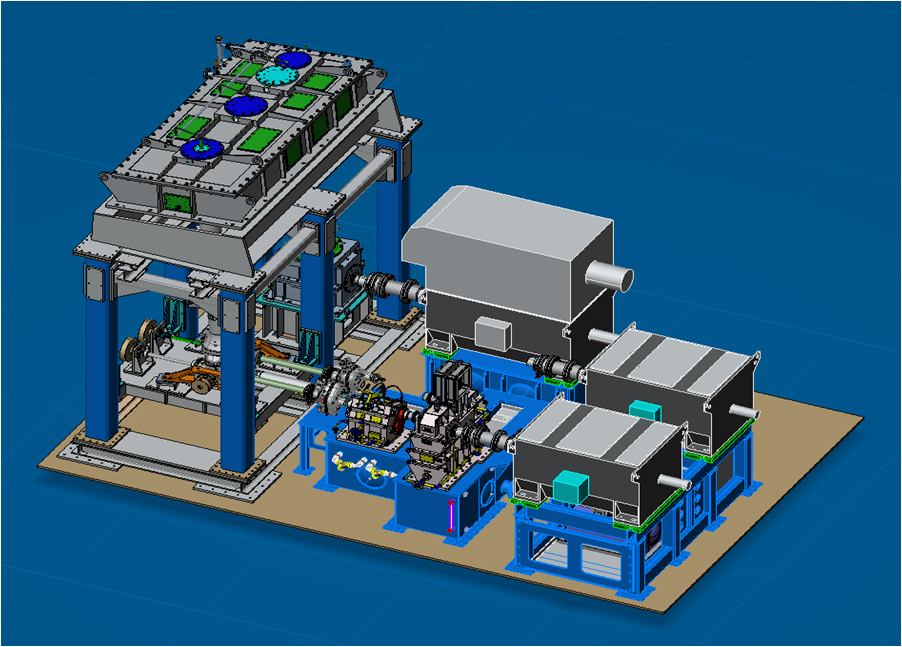 The Bell Helicopter 525 Relentless was introduced in 2012 as the industry’s next generation helicopter. It is Bell’s largest commercial aircraft and will support multiple mission configurations including oil and gas, search and rescue, emergency medical services, and VIP/corporate transport. The Bell Relentless includes several helicopter “firsts” such as a fly-by wire flight control system for commercial aircraft and a five-blade main rotor. The payload and range capability also make the Relentless unique. It can carry up to 16 passengers plus a crew of two and complete missions of up to 400 nautical miles at 140 knots.

The test cell diagram for the main rotor (MRGB) and reduction gearboxes (RGB) is shown in Figure 2. The main rotor test cell is in a large test chamber measuring 26 ft. by 30 ft. and extends two stories high. The control console is located on the second floor with a view of the test stand. In the test cell, two large 1,400 horsepower ABB motors simulate the left and right jet engines that generate the helicopter’s thrust. These electric motors drive a series of gearboxes during testing. These gearboxes are coupled to another ABB supplied electric motor that serves as a generator, which “regenerates” electricity used by the drive motors and reduces the total electricity demand thereby saving significant electrical costs. The tail rotor test cell is similar in design but uses only one 1,400 horsepower ABB drive motor and a 1,400 HP ABB generator to recapture the electrical energy. The test cell for the tail rotor transmission and intermediate gearbox assembly is shown in Figure 2.

The operator can turn devices on and off in the test cells like pumps and motors using buttons on the control consoles. The control console outputs are fed through an NI PXI chassis/module to the actual control devices so that interlock logic can be checked before the devices are turned on or off. For example, the lubrication pumps must be turned on before the motors are turned on. Each button has an LED indicator to signal the device is on and operational.

The system also has watchdog and fault monitoring logic so that critical devices like the hydraulics and motor control can be shut down in the case of an unexpected system failure or loss in communications.

The ABB electric motors are controlled using the ABB variable frequency drive (VFD). The PXI controller communicates to the ABB VFD through Modbus across a standard Ethernet connection as well as a set of hardwired, dedicated digital lines. G Systems leveraged an NI Modbus library for LabVIEW to create a configurable driver to format and parse the ABB specific Modbus messages. Modbus communications allow the software to set speed, acceleration, and torque. Actual speed, torque, and bearing temperatures are then relayed back from the VFD to the user interface via Modbus. For safety purposes, physical digital lines on the PXI-6512 digital output cards are used to command the drive to start or stop and perform a shutdown during a fault. As well, physical digital lines are connected to the PXI-6511 digital input cards so the ABB VFD can inform the control system of fault conditions.

Along with the parallel processes, there is also a software “mediator.” The mediator eliminates static dependencies by separately routing all of the parallel processes. No process knows about or communicates directly with any other process. This makes each parallel process reusable and allows for project specific code to exist only in the mediator. It also allows the various processes to run at different loop rates. For instance, the PID loops need to run at a much faster rate than the Modbus loop. Each process is configured based on the user-defined configuration for that test. This allows the user to dynamically change the channel configuration for a specific run without requiring a code change.

G Systems software controls 20 PID loops for the main rotor test cell and seven PID loops for the tail rotor test cell at rates up to 200 Hz. For the main rotor test cell, typical channel outputs controlled through PID loops include water brake loads, shear loads, thrust loads, cooling, and heating. For the tail rotor cell, PID loops include shear loads, thrust loads, and gearbox temperatures. A PID control algorithm consists of three coefficients, proportional, integral, and derivative. For a process variable such as temperature, a thermocouple is monitored to provide feedback to assure the temperature follows the target temperature ramp rate, which is set by adjusting the proportional, integral, and derivative coefficients. A PID control loop adjusts the heating or cooling incrementally until the set point or target temperature is reached. The P, I, and D values are tuned to control overshoot and variance in the control system. The software triggers an alarm if the process variable is not following the set point as closely as the operator would like. A graph allows the engineer to see in real time how closely the process variable tracks the set point as well as the output being sent to the device being controlled, i.e. heater, cooler, or control valve.

G Systems engineers used a G Systems developed software tool called Event Tracker for debugging and monitoring of the system software and hardware. Event Tracker timestamps event messages to a millisecond resolution, displays live event messages, and logs the messages to disk. Event messages could be errors, warnings, information, debug messages, or other user-defined events. These messages can be viewed using G Systems’ Event Viewer application. The operator can see the sequence of test cell actions that have been performed as well as any alarms or errors that might have occurred during the test. Since these events are also logged to disk, they can also be reviewed by an engineer after a test as well.

Example parameters that can be changed or configured include channel name, shutdown limits, ranges, scaling, and any offsets. The software transfers the configuration file to the PXI Real-Time controller via file transfer protocol (FTP). Channels can be copied and edited or created from scratch. When a new channel is added, the software prompts the user to select the type of channel. The type of channel is displayed on the left hand side of the user screen and the channel specific parameters are shown on the right.

The operator can also dynamically launch multiple graphs. For a particular test, the operator can save the graph/channel window look and feel and then load the same view for the next test. Up to ten channels can be displayed graphically on one screen. The graph scale and the time dimension are also operator selectable. Figure 4 shows an example graphical user screen.

“Bell Helicopter wanted a solution that would allow them to standardize their control, data acquisition, and vibration monitoring systems on the same hardware and software platforms and thus increase system flexibility and reduce development and system maintenance costs.”